Life is Strange: Let’s Do the Time Warp Again

The fictional friendship between Max Caulfield and Chloe Price in Life is Strange is not easily defined by everyday narrative standards. This is due in part because the player has such a decisive role in how these teenage protagonists reconcile their shared lifetime of trust, love, loss, laughter, and betrayal.

With all episodes of Life is Strange and Life is Strange: Before the Storm now available for purchase on most consoles, gamers now have the chance to approach this beautiful series in whatever order they wish. It is rare to find a game, let alone a movie, TV show, or book, that allows for such a unique way of approaching two distinct and emotional tales of American adolescence.

Released in 2015 by French Developer Dontnod Entertainment, Life is Strange follows the adventures of Maxine AKA Max Caulfield, an eighteen-year-old boarding school student in rural Oregon who discovers she has the power to manipulate time. Players guide Max through the struggles of being a high school senior, an aspiring photographer, and powerful manipulator of time. They will make difficult moral decisions on her behalf that have long-lasting, shocking, and sometimes fatal consequences for her family, friends, and peers.

The heart of the story lays in the connection Max shares with her best friend Chloe Price. Whereas Max is often introverted, quiet, and observational, Chloe is rebellious, fiery, and confrontational. They make a perfect teenage odd couple. Together, they try to find a missing student and uncover dark secrets that plague their quiet town. The sincere writing, as well as phenomenal voice acting, bring them to life as believable, honest, and endearing characters players will find themselves deeply invested in on an emotional level. 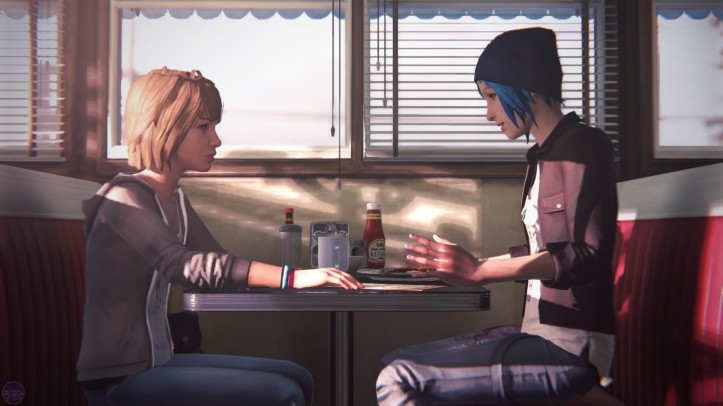 As Chloe and Max encounter nefarious bullies, violent drug dealers, corrupt school officials, and other obstacles, the fate of their relationship is guided by the player’s own moral compass. When things begin to take a turn for the worst, it is up to the player to determine how and if Chloe and Max maintain the love and respect they feel for one another. However, this relationship is governed solely through Max’s perspective, as players are not given direct control over Chloe’s actions.

With the full release of Life is Strange: Before the Storm in 2017, players have the unique opportunity to see things from Chloe’s perspective. Set two years before the events of the first Life is Strange, Chloe is given her chance to shine as the hero, and making choices as Chloe has an equally powerful and significant impact on the world around her. The absence of time powers, or any substantial supernatural presence, makes this prequel story feel more grounded, relatable, and approachable than some of the more far-fetched moments that mired the first Life is Strange.

Both veterans and newcomers alike to the series must now ask themselves: Which order should I play these games in? Just as Star Wars fans are divided on the “best” order to watch their beloved franchise, Life is Strange players may now challenge the conventional wisdom that the first game released is by default the right place to start.

On the contrary, Before the Storm is a better introduction to the world of Arcadia Bay than Life is Strange. This is due in part to the very nature of time travel, and the chaotic role it plays in the lives of Max and Chloe. Each time Max abuses or over-extends her power to rewind time in the first Life is Strange, she experiences physical pain in the form of migraines or nosebleeds. On an emotional level, she is tormented by the secret of her newfound power and her inability to understand it or fully control it. On a metaphysical level, she begins to question the nature of her own existence, and is unsure of just how severe the consequences of her time power will have on the world around her.

All this unease coupled with the everyday challenges that come from being an eighteen-year-old girl leads Max to feel distressed and afraid of what her powers mean. She is no comic book superhero. She is simply a young adult faced with an incredible responsibility. Rarely does she encounter the antiquated “good or evil” choices that plague many game narratives. Like our own lives, they often fall into various shades of moral grey.

But with the power to rewind time, Max can avoid the consequences of her actions. This is generally harmless for more trivial interactions, like when she rewinds time to trick one of the popular girls at school into inviting her to an exclusive party or successfully warning a classmate from getting hit by a flying frisbee on the quad. But when Max continually finds ways to undo some of the most serious moments in her and Chloe’s lives, she is left with the lonely and burdening knowledge of what could have happened without her timely intervention. She often causes a “butterfly effect”, and comes to find that the fabric of the universe does not take kindly to her meddling with time to protect herself and her loved one’s. Without giving away any major plot points, let’s just say erratic and unseasonal weather are the least of Max’s worries.

Understanding that time travel can be dangerous is precisely why the Life is Strange series should not be played in order of its chronological release. Players should instead begin their Arcadia Bay experience with Before the Storm. By placing themselves in the narrative chronologically, they will get to know the town and its inhabitants without the crutch of time powers to get them through difficult situations. As Chloe, no encounter can be undone, no conversation unsaid, no action reversed. While she must also make tough moral choices just like Max, hers become more real and impactful because she must experience them authentically with no “do-overs” allowed.

Once players do get to control Max in Life is Strange, they will have already familiarized themselves with Arcadia Bay and its residents from Before the Storm.  But seeing the world through Max’s eyes is very different from Chloe’s. Time-powers aside, Max moved from Arcadia Bay to Seattle when she was 14, making her return to her hometown a familiar yet foreign one. The rift between Chloe and Max is palpable, as Max and her parents moved shortly after Chloe lost her father in a car crash.

Having failed to keep in contact with Chloe after moving, Max reconnects with her long lost best friend nearly four years after leaving her at her most vulnerable and heartbroken state over her father’s death. The pain of that abandonment is not something Chloe can easily overlook. Even as Max actively uses her time powers to help Chloe, she unintentionally causes her even more harm, often testing the resolve of their complicated friendship.

No matter how strong their connection, there is only so much Max can do to protect her best friend. Chloe’s reckless behavior often puts the two of them in dangerous and life-threatening situations the closer they get to finding the truth of what lurks in Arcadia Bay. For every encounter that Max manages to rescue them from with her time powers, the town of Arcadia Bay, and even the very fabric of reality, become more threatened by Max’s actions.

Max’s artful photography in Life is Strange plays both an important narrative tool and symbol of why players should experience Before the Storm first. Max often uses photographs to enhance her time powers, and can use pictures she has previously taken as a way to enhance the length of time she can travel back in. The photos act like a window that Max can use to go right to the moment she took them. But the consequences for these larger jumps in time can be devastating. No matter how hard Max tries to make her and Chloe’s lives better through time travel, she ends up causing harm for others through the butterfly effect.

Photos are meant to be moments captured in time. We can use them to remember and reflect on the past, but we cannot change the past. Max learns throughout Life is Strange that even though she can change the past, it does not necessarily mean that she should.

Players should take a similar approach to this story. If they begin the series with Before the Storm, they can see the past through Chloe’s eyes. The fates of the characters will follow a natural chronology. The world will exist as it should. When they complete Chloe’s meaningful journey, it will make them all the more prepared for when Max re-enters her life.

Both Life is Strange and Before the Storm are important works that explore friendship, youth, morality, and time travel on a meaningful level that few games dare tread. If you haven’t played them yet, do yourself a favor and start with Before the Storm. If you have already played both of them, challenge yourself to seeing the world of Arcadia Bay through this new lens. You’ll be glad you took the time to do it.